Can You Make 100K?
Click Here
LoginContact Support
In his presentation at SuperFastBusiness Live 9, autoresponder expert Andre Chaperon talks about storytelling and autoresponders and how to use them to increase your conversions.

James: Another superstar guest from overseas – not just one country but I think he’s lived in many. At least, South Africa, London and Spain and now he’s in Australia. So, super rockstar guru, email, Autoresponder Madness, legendary storyteller and the benchmark of the Internet marketing industry. I’d like to welcome Andre Chaperon on the stage. Hello, buddy. Now, please have a seat. We’re going to…

Now, we’re going to do this together. You do smell nice.

James: Yeah. That’s good. Basically, how did you get into this position of being the authority of autoresponders? 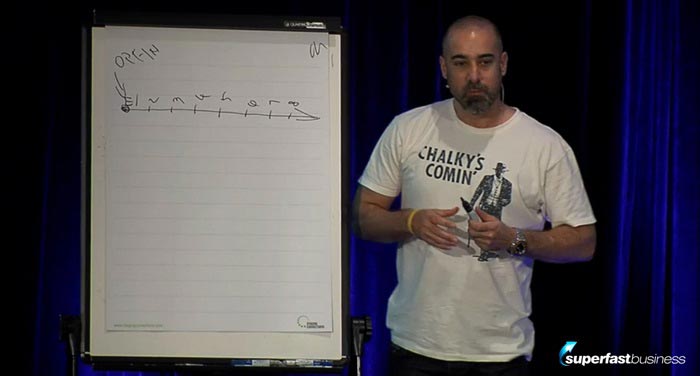 James: We’ll do that since we did preps.

James: Technically, it is.

Andre: So, it could be over for five minutes which means we’ll have a 15-minute Q and A.

Andre: It was OK.

James: Good reaction. I think what would be interesting is just to talk about what you’re really passionate about. I think from the previous prep work that we’ve done, we’ve established that you got into email writing because you don’t like to make videos or do other formats and I think you also revealed at some point that you can’t spell that well. You’re dyslexic or whatever. You didn’t do so well in English at school. So none of these things matter if you want to be the world’s greatest autoresponder writer. What sort of tips or advice do you think would be worth sharing today? Do you want to go to your mind map and talk us through that process?

Going over the email system

Andre: I’m going to briefly just go the whole system basically. And the system, there’s two parts. So, we’ll go over the first part which is kind of that there, 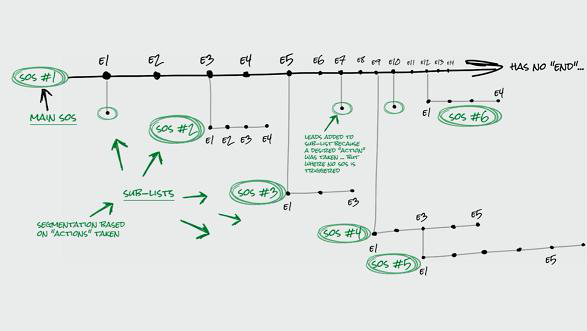 that’s all the slides by the way. And the next element of the system is actually watch me email. And I’ve got three emails that I’m going to read. Two from somebody else. One is from me. So, that will create the context on how to write the emails I guess. If there’s time, I’m just going to…

James: Go for it.

Andre: So, I’m going to draw here as well…

James: By the way, I’m happy to email you these two pictures. If you’re happy for me to send them over in case you can’t read them. But it will be as discreet as possible.

Andre: So, the way that I figured out how to write what… first, there’s a system, the framework and everything just kind of get wrapped around that. Almost everything I do uses follow-up sequences or autoresponders. It doesn’t use broadcasts. And the reason will become clear shortly. So, as you can see on the board, this line basically is the email timeline.

So, over here is when somebody opts in, you have an opt-in over here. The opt-in and it gets email 1. And then we have the sequence of emails that basically never ends so email 2, 3, 4, 5, 6 and 7 and onwards.

What I figured out is, because I like to tell stories, and I just kind of figured this out because I’m an introvert and I don’t have the ability to do video and podcast and all these other cool stuff. For me, the only way to communicate with the mass audience was through email. So, I started writing stories and this was just by chance, it just seemed intuitive to me just to write stories of what I’m doing and you know, how I was figuring out this whole Internet marketing thing. So, I started writing stories and I started working, and it all started to click when I was watching things like 24 and Lost. So basically, I figured out that telling stories across emails is way better than writing emails in isolation.

Almost everybody writes emails in isolation. They’ll have an idea, write an email and send that. The next email, there’s no big connection between the emails unless it’s a promotion. So, what I do is, all of these is essentially one big, long story although it’s not necessarily the same story.

“Create themes for your stories.”

So, I’ll have themes. For instance, if this was James’ business, it’s Internet marketing business. So, we’ll say that the first two emails here is the intro, for example, ‚Basically, I’m James, this is what I do, this is what I have…‛ And James sort of figured out that the next part of what he wants to show them is, let’s say, traffic. So he’ll do those three or four emails as basically demonstrating how do you do traffic. And maybe the next batch would be conversions and all these together makes one long story. Well, that doesn’t have to be one and the same story. You got these different stories that happen.

He’ll do an intro, “I’m James…” it will span a few emails. You’ll then segue into you know, “For you to be able to have a working business, you need to be able to drive leads,” and this part of the story will kick in. And again, because it’s a story, it needs to be written as such. So you’ll do like a case study for example. You know, “I’ve got a subscriber that couldn’t get traffic and he found me and this is what he did.” So basically, there’s a story happening here and within that story, James could segue into one of his products. So, it could be creating context over here, between those emails and this over here, it’s more of a pitch.

So, at email number 5, James introduced his traffic offer. And let’s say within the context of him talking traffic, he mentioned something about SEO because you have an SEO service, right? And this content here, the context of the email talks about SEO. And there’s a link that’s coded. And if anybody clicks that link, it’s basically, it’s calling people out. If someone is just interested in paid traffic for example, they’re not going to necessarily going to be wanting to do organic traffic.

Basically, the email is going to fall to them, it’s going to call them out. If they click that link there, it will move them to a set of sequence. Now, there’s they’re still on this top sequence but now there’s also on a separate thing. And I call these things circle of sequences. So, now we have email 1 there, email 2, email 3… and this doesn’t have to be long, let’s say until email 4 for example. So now, running a parallel of these two things now and this loop here now talks about SEO.

So, now James would write a few emails, or would do another case study for example about whoever and you identified them as a client, their rankings tanked. You then hired them and then they didn’t beg you. You told us the story right? That would make a nice thing right here at which point you would pitch your SEO services there. This would then just carry on and carry on as you can see in this picture here…

James: So Andre, do the emails clash, like when they’re coming through at the same time? Because I know some people turn off the main broadcast while they’re doing sub sequences.

“You control the whole thing.”

Andre: So, at the moment, there’s no broadcast emails as well. This is all completely automated follow up sequences. It allows you to control the context of everything that’s happening over here. So, typically when someone enters your funnel over here, they don’t necessarily know you, they don’t trust you yet. So, this is all about controlling the entire frame and you control the whole thing. You introduce, you’re going to introduce. You start to deliver premium value and your equity and the hours increase over time.

To answer your question I guess is once people self-select as they click on different links and reading the emails, their ability to consume information is increased. I mean, they’re clicking on links, they want to know about certain things. Certain people can consume a lot of emails and certain people consume less so if they’ll just read this, they will just kind of read along. They don’t necessarily click links and therefore, they will get less emails from you. Does that make sense?

You now have the ability to see that certain people have been self-selected and they’re interested in certain things and are typically not interested in some other things. So, later on when you do broadcast which we’ll get into much shortly, you can cherry-pick different groups of people that have already self-selected themselves.

So, typically, what happens is you build your house list for example and people then send broadcast emails all the time and what happens is, if this person over here that’s gone to the SEO list for example, if they all they’re interested in is SEO for example and they could care less about paid traffic because they haven’t just… for them, they’ve been burnt before and they kind of want to avoid it for whatever reason. So, for a while, they’re going to avoid it. If you hammer them with a broadcast on the main list all the time, you know, your communication with them is going to be decreased. You know, you’re sending them stuff that is not relevant to them anymore. So, by rigging your system this way, you get the ability to basically talk to people about exactly what they want.

955 – The Dangers of Keeping Staff Too Long

953 – Some of My Biggest Financial Mistakes