Four years ago, a friend’s Facebook post caught James’s attention. It was on the Japanese concept of ikigai, a word he had never heard, but the meaning of which resonated with him on many levels.

The word inspired a blog post and podcast episode that landed tens of thousands of visits, and became the most-downloaded content of SuperFastBusiness.

Ikigai has gone mainstream since then. Millions know it as defined by a Venn diagram merging passion, skill and profession to achieve one’s ultimate fulfillment in life.

The surprising fact is that to the Japanese, it has nothing to do with this diagram. Nick Kemp, who can speak Japanese and is a self-labeled Japanologist, discovered this when he went chasing the meaning of the word that was close to his heart since his sojourn in Japan.

Tune in as Nick enlightens us as to the true meaning of the Japanese word ikigai, and how it can be applied to unlock joy and satisfaction in your own life. 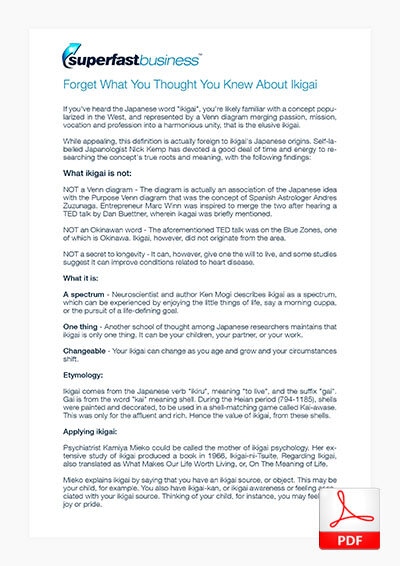 Nick makes a shocking discovery about the Ikigai Venn diagram

Nick thought that it was a Western interpretation, so he decided to find its origins.

He discovered an entrepreneur, Marc Winn, had merged the concept of ikigai with what was the Purpose Venn Diagram after watching a TED talk on the Blue Zones, given by Dan Buettner.

Marc, whom Nick has interviewed, thought it would be a cool idea to merge the two! The diagram that misled many

When Nick had presented Marc’s concept of ikigai to his Japanese students, no one had corrected him and he supposes there might be two reasons for that.

#1: to the Japanese, it’s an important concept, but it’s not a special word. They grow up with it; it is just part of their vocabulary.
#2:they’re so used to Westerners misinterpreting concepts that they just don’t care.

Moreover, according to Nick, it is not an Okinawan word, or a secret to longevity, as a few books claim, but it gives you the will to live.

The Purpose Venn Diagram before it became ikigai, was used by HR managers, and they thought it was a research-backed concept, when actually, a Spanish astrologer Andres Zuzunaga, had come up with the Purpose diagram concept based on a natal chart, and meditating.

Millions of people think it’s ikigai but it’s NOT.

“What if everything you thought you knew about Ikigai was WRONG?”

So what IS it?

Nick runs a website IkigaiTribe.com. In the podcast section, you will find several interviews of Japanese professors and authors – his research on what it really means, and the history of the word and its various meanings.

Nick thinks Ken Mogi, a neuroscientist and author, describes it best as a spectrum.

It can be the spectrum of enjoying the little things of life. So for James, it could be, enjoying his morning cup of coffee and his surf. Or it can be the pursuit of a life-defining goal.

But there are two schools of thought amongst Japanese researchers. Some, like Ken, think it’s a spectrum, but others think it can only be one thing; it could only be your work, or your children, or your partner.

For Nick, he believes it’s a spectrum, but within it, you have this core life role or life goal that you’re pursuing, and it will change as you age and grow.

Probing the etymology of ikigai

If it’s not Okinawan, where is it from?

Nick doesn’t know, but he can give us a history of what the Japanese word means.

It’s from the verb “ikiru”, whose direct translation is to live, and the suffix “gai”.

Gai is from the word “kai”, whose direct translation is shell.

About 1500 years ago, shells used to be painted and decorated, and they were used in a shell-matching game called “Kai-awase”, similar to a card-matching game. These were only for the affluent and the rich.

The inside of the shell would be decorated, and they would flip them over and mix them all up.The value of ikigai comes from these decorated shells, and that’s what the kanji represents.

The kanji of this word is quite complex to write. It is written with one kanji character followed by hiragana script.

Japanese is broken into three syllabaries:

1) hiragana, which is your basic script
2) kanji, which are Chinese characters
3) and katakana, which is used for foreign words.

The ikigai in kanji

The first character (in kanji) represents life. After that, in most cases, it’s written with hiragana. If it is written in kanji, the last two characters represent shell, and floral design, or decoration. And that’s why it’s related to decorated shells.

Kamiya Mieko, a psychiatrist, could be called the mother of ikigai psychology.

She was one of the first researchers to extensively study ikigai, and her seminal book, Ikigai ni Tsuite, which would translate to Regarding Ikigai, but it’s often translated to What Makes Our Life Worth Living, or, On The Meaning of Life.

Her book is still considered standard by current day Japanese researchers and psychologists, despite it being published in 1966. The book is not published in English.

Ironically, she died at the age of only 65.

Nick found the book hard to read in the Japanese language, but from it he learned that there are seven ikigai needs that we need to satisfy in order to find or live out ikigai or to experience our ikigai.

She describes it as you have an ikigai source, or an ikigai object, and she defined that as ikigai.
And then she says we have ikigai-kan. Kan means feeling. So ikigai-kan would mean ikigai perception, or ikigai awareness, or ikigai feeling.

So if one thinks about one’s ikigai source, such as your child for example, your ikigai-kan would be feelings of love, joy, pride, even, like, hope for the future.

And that’s a really good way for us to understand ikigai, because we want to have ikigai-kan as the experience, the feeling, and we can identify our ikigai sources.

So for James, it would be, his daughter, his wife, his family, but also surfing or his work.
Ikigai and ikigai-kan are really important points.

The seven ikigai needs to experience ikigai, according to Kamiya Mieko

#1: life satisfaction. And the important point for this one is, you have this idea your life is moving forward. That’s a core aspect to ikigai.

Even if you’re struggling, or depressed, if you have this belief that things will get better, and you know there’s something you can do, and you also have some life satisfaction, you can actually feel ikigai in that moment.

#2: change and growth. Kamiya states that boredom can indicate a poor mental health state, and that we must embrace change in order to grow. And so we must proactively seek change. If we do this, we’ve got a very good chance of experiencing ikigai-kan.

“We must embrace change in order to grow.”

#3: thinking that you have a bright future, and that your life will unfold in a new direction, a new positive direction. It’s similar to life satisfaction.

What Kamiya suggests is we need to have manageable short-term goals and ambitious long-term goals.

So believe that you’ll have a bright future and set goals to move towards that future.

“We need to have manageable short-term goals and ambitious long-term goals.”

#4 resonance. This is about interpersonal relationships. We need to be accepted by our friends, our coworkers, our family, but we also need to have an intimate relationship with a significant other.

Then there is also acceptance from yourself. Ken Mogi talks about the most important thing you can do is releasing yourself, which is accepting yourself. If you can accept yourself, your life will dramatically change.

Then you won’t care about being accepted by strangers or other people.

In other words, you will feel happier if you are accepted by people you care about, if you accept yourself, and if you worry less about acceptance from everybody else.

#5 freedom. Kamiya says, we’re not completely free. But we need to have the sense that we’re free with agency and autonomy, and that despite life’s restrictions, we still have the freedom of choice.

Every day, we have choices, and she also says that we can make choices for the long term rather than acting on impulses.

We can also sacrifice our own freedom for the freedom of others, such as our children or partners. And that, in and of itself, is a freedom of choice that we make for ourselves.

“We need to have the sense that despite life’s restrictions, we still have the freedom of choice.”

#6 self-actualization. She describes this as the development of one’s core. That really means one’s true self. This takes patience, and a lot of effort. It goes back to accepting who you are, and realizing who you want to be, rather than achieving wealth or social recognition.
So it’s not about being your best self. That’s unattainable, because you could always do something better. But you can be your true self. And that means to live and align with your values.

And if our answers aren’t life-affirming, if we don’t think what we just did wasn’t worth it, we’re not going to be able to experience ikigai. And she has four specific questions on how to reflect on your life.

What she’s saying is, every day we wake up to a new morning, and we have the opportunity to make something of our life.

And she’s not saying one is obligated to make the most of one’s life, and it’s not about one’s self worth.

With the things you are doing today, do you deserve to exist?

Are you making something with your life and can you justify it today? You can answer that with this example: I’m helping people in my business, so I do deserve to exist.

“Are you making the most of your life? And can you justify it today?”

The critical takeaway of this episode

This is how Nick defines ikigai:

Ikigai is a life philosophy involving daily rituals, living your values, building intimate relationships, fulfilling your roles, and pursuing a life goal with a healthy sense of urgency. If you can do some of that, or all of that, you’ll experience the Japanese concept of ikigai.

We wish everyone a long and happy life!

You can listen to the full interview on iTunes