Can You Make 100K?
Click Here
New LoginOld LoginContact Support
Jarrod Robinson and Ash Roy took advice from James that completely changed their lives. Get a glimpse of their stories as our recap of SuperFastBusiness Live 11 continues.

James: Some people get offended by that.

James: But I can see the resemblance. 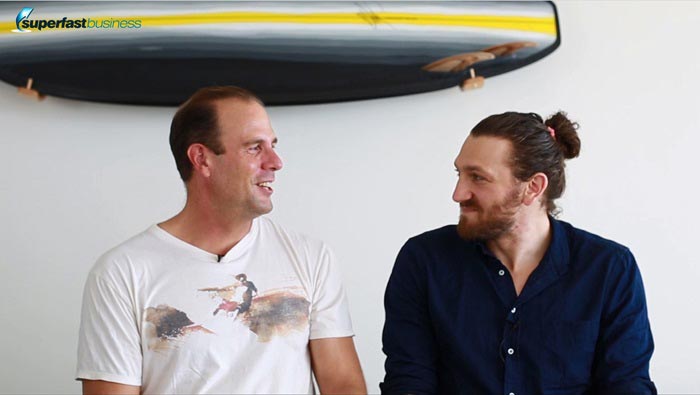 Ezra: Well, people take religion very seriously, to the point where we’ve talked about doing a religion show for a long time. And we did a sex show.

James: Before we did religion.

Ezra: Before we did religion. If you haven’t listened to it, ThinkActGet.com, Episode 27, I want to say. My mother comes on the show, and we talk about sex. It’s pretty wild. It’s a good show.

James: We also talk about bananas. In a separate episode.

So I want to talk about what Jarrod shared.

Ezra: Not bananas, not related to sex, OK? It was like, bananas… let’s talk about what Jarrod said.

James: Jarrod, he’s just such a great guy, and he was working so hard as a PE geek. We mentioned him on a previous episode.

Ezra: The amount of things that guy had done. He did like…

James: Yeah, he was ready to write “A Hundred-Hour Work Week: How To Kill Yourself Early.” He had t-shirts, soundtracks, software…

Ezra: He had software, he produced a CD.

James: This guy will set up a business in like, half a day. He’s super bright, really good go-getter.

Ezra: And I would say, hearkening back to our last episode, we’ll link to it, the exact problem of doing too much and not doing one thing deep enough.

James: Oh, broad. Broad, not deep. I said “Mate, I think you need some help.” So we worked out his effective hourly rate, and it was like, $5 an hour. Basically the formula is, how much you make in profit divided by the time taken to get. And I said, “Get out of the classroom, bro, it’s low-paid work, and you can leverage and impact more people.” And he said, “Oh, but I can only have a certain amount of people in my classes.” And I said, “Nonsense, you can have plenty more than that.” And he did, and he realized that this actually worked.

So he stopped doing 80 percent of the stuff he was doing, and focused…

Ezra: And did the things that actually brought him results. 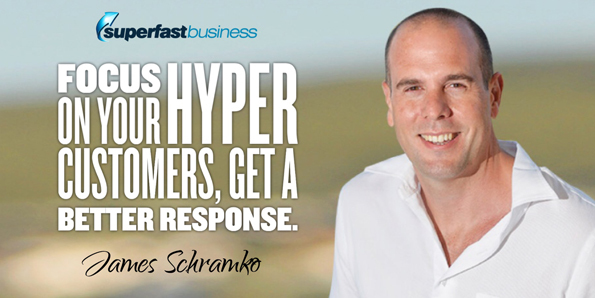 James: Exactly. So what sort of things would they be? He went to his database and had a look at who’s the most active. These are my hyper customers. So if you focus on your hyper customers, you actually end up getting a better response.

Ezra: You know, what we started doing was only surveying our, like, people who buy from us twice or people who make big orders, and then building our business and products around those people.

James: Well, that’s exactly what happened with this actual event. The 70-odd people, and by odd I don’t mean like they’re unusual, I just mean, you know… 70 people filled out the survey, and they’re probably the people who have something to say, and their feedback will actually be counted in the next one. For the most part — I’ll just chop off the bottom 10 percent and the top 10 percent and see what majority of the themes are.

A framework for sales

The other thing Jarrod did is he took a framework that I’ve created already, that is a very simple framework for getting business-to-business sales. And he replicated it exactly, he’s really good at understanding the framework, and used it, and instantly…

Ezra: The high-level framework is to what, create a video pitch?

James: It’s a video pitch to get a big business to pay you lots of money. He instantly got a result. He got $10,000 straight away.

Ezra: Is that framework inside of SuperFastBusiness?

James: It’s inside SilverCircle, and I talked about it in SuperFastBusiness in a live monthly training.

James: About 2 months ago.

James: Because people need to know this. And after he did that, he said, “What do I do now?” I said, “Jarrod, do it again.” And it worked again. So exact same.

Ezra: Do what works.

“Do more of what works.”

James: If you want to get a book from high up in the library, you get the ladder. It’s a framework. It’s a step-by-step system to follow to get the result.

Ezra: We just keep doing more of what works in online advertising. We do the same thing.

James: So if you got a book from up high in the library and then you want to get another book, you wouldn’t forget the framework, would you? You’d just keep using it.

James: Exactly. Then you get someone else to get it for you.

Ezra: There you go. That’d be the next step. You get the project manager in.

James: He also switched from selling one-time. He was doing this horrid thing of like, lifetime membership. Buy once, and I’ll serve you for infinity, which is very open-ended, isn’t it?

James: Well, even if you do and you do it for 5 years or 10 years, how long is lifetime? If they see you in 10 years doing something else, they’re “Oh, that guy ripped me off. He promised me lifetime membership.” So he now has a recurring subscription.

Ezra: I think this comes back to a point you like to make of not creating a tail for yourself, or at least being deliberate about the tail you do make.

James: Well, every time you make a commitment to supply something, that’s like this tail’s following you around. The most classic and wild example I’ve seen is people who sell high-ticket items for one time, and then they quickly, basically, they’ve exhausted their supply. So they’ve sold, say, 5 years’ worth of delivery fulfillment, maybe, is it 5, is it 3, is it 10? We don’t know, so it’s a bit ambiguous.

Secondly, when they go on to the next thing, they’re going to upset everyone in their audience.

James: Thirdly, there’s no real incentive to turn up and keep doing it because the money’s stopped. And the worst part of it all is they pretend that they got all that pay upfront when a) they didn’t actually collect the money because it’s on part payments; b) a huge proportion of them refund; and c) They haven’t amortized it over the delivery time, they’re just counting it upfront.

Ezra: Be really, really, really deliberate about what you commit yourself to and know how you’re actually going to fulfill on that thing.

James: And never take an income report as verbatim until you investigate.

Ezra: Launch math means nothing basically. Top line means nothing. It’s what you actually keep at the end of the day.

James: In fact, the only people who do publish things generally have an agenda, and that is to convince you through the publishing act…

Ezra: To buy something.

James: …that they are legit. When I’ve often found that’s not the case.

IM tactics for a non-IM market

So that was a big thing. Jarrod set up a recurring membership, where have we heard this before? And automated webinars, that’s what he just slays with. And he’s in a non-IM-savvy audience. The less savvy the audience, the more likely this will be the most amazing, wondrous thing that someone could discover. Hey, I can join a session online and learn about something instead of having to go to the local town hall or pay to go to the concert center.

James: I do. I actually prescribed it for him.

Ezra: We live in a gaming culture.

James: No, I said, “Jarrod, you got to spend time doing fun activities. Every day, you got to do something fun.” And that’s counterintuitive.

James: I said, “Go and tell your partner that your business coach just told you you need to play more, every day.”

Ezra: Well, you surf. Look at you, you’re in good shape. You’re out there surfing, you exercise, you’re not in front of the box.

James: Yeah, every day. I’m often saying, “Go and watch a movie during the day. Do some Playstation. Go for a ride, do some surfing.” Everyone’s just grind, hustle, workaholic… what for? I don’t understand. And when I was paddling onto the waves this morning, it was the most supreme elation, and I thank whatever for making that possible.

The final thing with Jarrod is he’s created a content app that actually pulls in his website and he can send push notifications. So he can let people know when there’s new stuff. Very clever, I’m making one now, so look out for that on SuperFastBusiness. Thank you, Jarrod, for your help.

So summary: turn off the bad projects. Identify your best customers, come up with a leveraged recurring solution, and create an automated and highly segmented sales funnel. Simple as that.

“Build your business around your best customers.”

Ezra: Build your business around your best customers. Attract more of them rather than people who aren’t that great to serve.

James: So Ash Roy is an interesting chap. He’s actually one of the…

Ezra: Ash got on stage and crushed it.

James: Yeah, and surprisingly good. I wasn’t sure what to get but he asked me for some stage time, and when I said…

Ezra: Well, I was surprised you said “yes.”

James: Well, he was surprised more than anyone. He said, “I didn’t think you’d actually say ‘yes'”. And I said, “Yes. You know why? Because I want to give people…”

Ezra: You get in life what you have the courage to ask for.

James: I want people to have an opportunity and a platform that no one else will give them. Here’s a guy who had sunk a lot of money into a lot of trainings, had got nothing but debt, and I’m the first person who actually cared enough. I turn up to the local meetups, I’ll get on the phone with him, I actually wrote the sales copy for him to use for the offer that I forced him to put out there, and suddenly he made $10,000.

Ezra: Good for him.

James: And here’s the bottom line: if Ash can do it, anyone can do it. Because he had no particular advantage, he’s a shy, humble and knowledgeable guy who’s finding it a struggle. I mean that in a nice way.

You didn’t have any special abilities. You go back to when you were a kid, you’re just some filthy little kid rolling around in the mud. Seen the picture. Dirty kid.

Me, I had loving parents and a good upbringing and a traditional schooling.

Ezra: It comes back to that willingness. You’ve got to be willing to actually put yourself out there and try.

James: So he put himself out there, and basically, I’ve encouraged him to put out an offer, I wrote it for him, he smashed through his wall. He found his thing.

Ezra: Starts with one.

James: Yeah. So catch up with the next episode, I hope you’re enjoying this series.

Get recordings of the FULL event talks inside our community. Click HERE