Can You Make 100K?
Click Here
Log InContact Support
You can learn how to do something by watching others. But if you really want to be a success, it doesn't stop there.

Innovation
Ezra: And we’re back at ya. We’ve just finished our ThinkActGet lifestyle business retreat and one of the most important lessons that I’ve learned from this retreat is that of innovation. Something interesting happens when you do something.

James: Yeah so, you know there’s a lot of ideas and cool stuff and when you get together with other people, especially smart people, then you’re seeing the way that people do things and sometimes it’s different to the way you’re doing it before. But the thing that I think is extraordinary is when you implement that thing immediately.

So what we found, we’ve spent about a week together now and I’ve been, you know we’ve been sitting nearby doing laptop, sort of doing our own work, discussing what we’re up to, showing each other a little trick or whatever, but immediately we’re implementing. 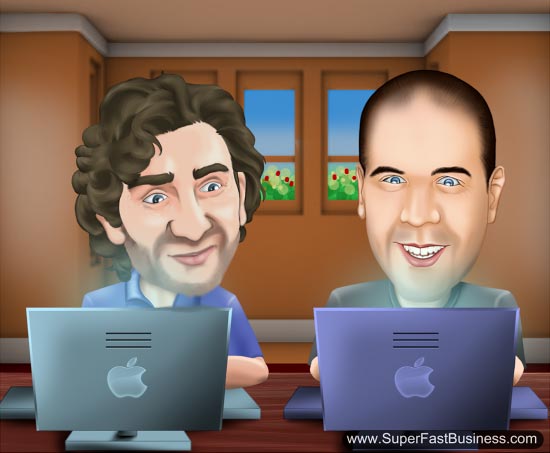 Ezra: And you know, it brings us back to the concept of getting what you want from people who have it. If there’s someone who has what you want or is doing what you want, you learn from them. You implement those things and then you innovate on top of them.

So you add your own little flair to it and it’s just one of the quickest ways to make leaps in your life is to be around people who are having the experiences that you want to have and then learn from them how they’re doing it and go about it.

James: Yeah and the easiest way to do that is to watch the blog posts that get put up on SuperFastBusiness.com and SmartMarketer.com. Both of us post tips and tricks and videos and podcasts and all sorts of things pretty much every single week. And if you were to follow those, and then implement, and even join in the discussion by commenting next to the videos, your business is going to actually leap forward.

And we also recommend you listen to our combined podcast which is called ThinkActGet.com where we talk about this sort of stuff all the time. Pretty much every week we have a new topic and then we argue with each other, share ideas and we issue some action steps. So check it out at ThinkActGet.com.

Focus Gets You Growth
Ezra: Please do and we’ll leave you with one final thing, which is that what you put your attention on grows. Where your attention goes… grows.

James: Yes, like going into a dark room with a flashlight. Wherever you point that flashlight on is exactly what you’ll see and you won’t see everything else.

That’s why things like coming to the ThinkActGet lifestyle business retreat which is what we just finished here has such an impact on your business because you’re spending a certain amount of time narrowly focused on one topic and you tend to make leaps and bounds in that area when you put your attention on one topic for an extended period of time.

The Bookshelf Analogy
James: So here’s how you take that information and implement it. You might be thinking, well, gosh, two more blogs to follow, one more podcast. My challenge is get rid of a couple of blogs or podcast that you’re following that aren’t getting the results that you.

James: The bookshelf. Imagine you have capacity for six books on your bookshelf and it has solid bookends. If you’re going to put more books on the shelf, you’ve got to take books off the shelf. So, we’re asking you to receive some information from us, see what you can get off the bookshelf that’s not serving you any favor, that’s just taking up space and it’s actually taking your attention and not getting you the results.

Our stuff’s going to get you results. Take something off the bookshelf, put our stuff on and be sure to comment so we know how engaged you are with all of this stuff.

Ezra: Thank you for watching this video. We appreciate you spending a little bit of time with us. I’m Ezra Firestone.

Ezra: We’ll catch up with you soon.

Enjoyed the podcast? Get more episodes by subscribing in iTunes

Please leave your comments below:

980 – This One Tool has Transformed My Membership

979 – Double Your Conversions in 8 Months with Hyperfocused SEO

977 – Behind the Scenes: Migrating an Established Membership Community (Mine)