Can You Make 100K?
Click Here
LoginContact Support
Building a business is a lot like waging a war according to Sam Cook. In this presentation from SuperFastBusiness Live, ex-army officer Sam Cook reveals the striking similarities between winning marketing and military principles. 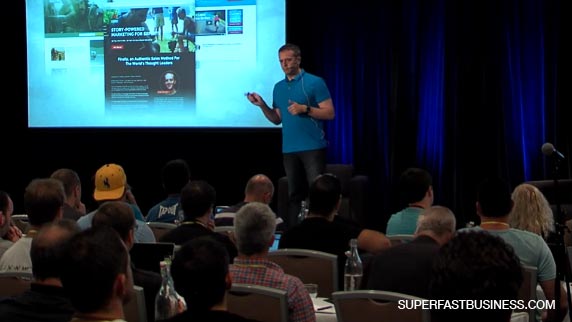 James: So, right now, we’ve just got a short session. This is a SilverCircle case study, so we take a SilverCircle mastermind member; we have a look at what he’s been doing. He flies under the radar, we might get a video played in a second.

This SilverCircle member’s called Sam Cook, but he’s ex-military, he travels around the world now, quit his job and has done some remarkable things in a short space of time doing the right things and that’s the key point, so I’m going to play a video and then Sam’s going to come up and explain his case study for just 20 minutes. Let’s see if we can get this video rolling.

Roll VTR
Video: “My vision for Run Transformation has always been to make available to a larger community what I’m able to do every day with my coaching, and that is to reach into an individual and grab the core of what they are capable of and show it to them and make them capable of accessing what their true potential is.

And so I want nothing more than put people in a broader scale to be able to put together what it takes for them to be able to perform at a level that gives them a tremendous satisfaction and joy. Every time an athlete is in front of me, it’s the only person on the planet at that period of time. It doesn’t matter if they’re an amateur, or 500th in the world, or they haven’t had an opportunity to win an Olympic medal.

It’s like a muse-type thing where I’m completely focused on the athlete and I’m completely absorbed. I can spend two, three hours working with an athlete and I’m not aware of how time is passing. You have to work on the person first; you have to acknowledge the reality of who the individual is way before you think about their performance. The ability to have a life, that that’s what you’re doing with your life, you’re working at helping people to be the best they can be, that’s pretty inspirational.

And in my world now, triathlon, the bike, the swim, all of these things add things that are holding you back as a runner. And my job as a coach is to reach inside of each athlete and shake off all the stuff that is not beautiful running forms.”

Sam: So that video is something that I had no idea how to make just a year ago. In fact I was sitting in the same seats you guys were, had just joined SilverCircle and I met a guy named Ryan Spanger who’s also in SilverCircle. He gave a presentation video, and I said I need one of those.

The reason I needed one is I entered into a very risky business model, which I wouldn’t advise unless you’re really good of working on performance basis. And my running coach needed a video and I decided I want to go all out on it. Now I paid for that video.

I produced it and what I learned within the space of two months by hiring Ryan Spanger to do that was the entire process of video production and making sales films as we call them, not a video but a film because it’s story-based, documentary-based. 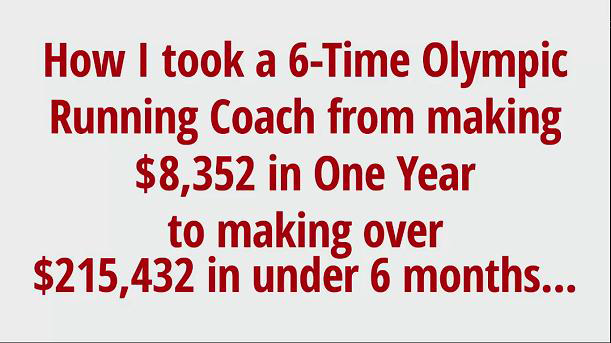 So this is not going to be the cheesy marketing headline I just put up there. That’s not the title of my talk. I just put it up there because in SilverCircle we don’t do that kind of stuff. We do the real headline and that’s actually true that headline. But the real story is much better and funnier. 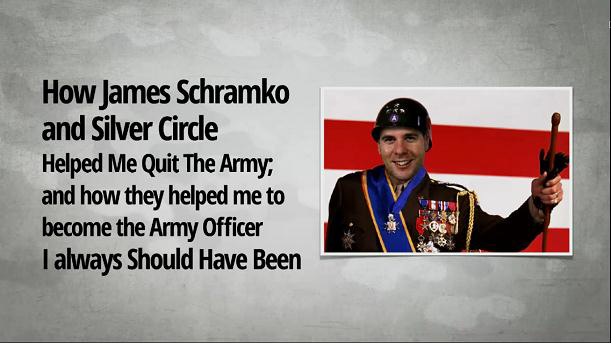 Why Sam quit his 6-figure job
I am going to tell you a story about how I quit a mid-six-figure-a-year job. And quick story: James loves General Patton’s quotes. When I was little, General Patton was the reason that I decided to go into the army because I watched the movie “Patton” and I just thought James would look good in that outfit.

And also James, funnily enough in SilverCircle, in an indirect way, has actually made me into the army officer I actually wish I would have been before I quit. Now I’m not going back into the army, but it’s a really interesting story about things I should have known and done in the army but was resistant to. That is Lieutenant Colonel Greg Riley in 2005, the most aggressive, fearless tactical commander I’ve ever seen. He epitomized the maxim there by General Patton which is speed of execution, and like we talked about in SilverCircle, “80% now” is always better than “100% never”. Because you’re never going to do it, nothing will ever be perfect. Speed of execution; when you’re doing Facebook ads, just get out there and do it. Roll up your sleeves and do it. 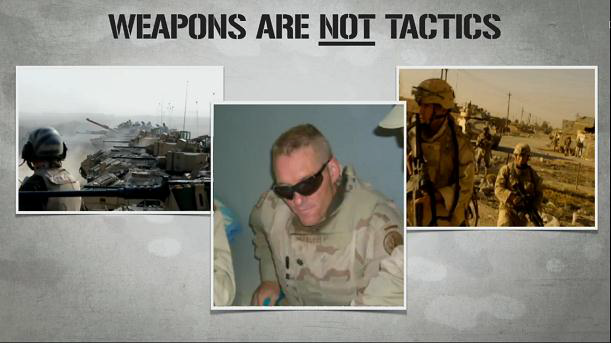 Tactics are not weapons. And what I mean by that is your Facebook ad account is actually a weapon. How to use it successfully, like Ezra just gave you, are tactics. You can actually shoot yourself and kill yourself with the weapon, I’ve seen it happen. It’s not pretty.

Tactics is learning how to implement all of these different weapons together – your Facebook account, your Pinterest account, your blog. And what SilverCircle, and what James taught me when I listened to a podcast before I’d even joined SilverCircle, I listened to how to do Facebook ads, and Own the Racecourse, I implemented it. And then that is what happened within an initial period. 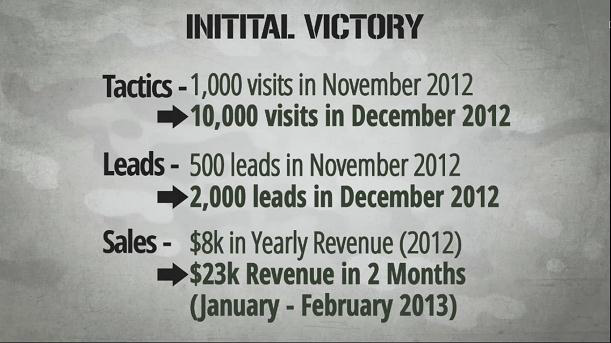 Amazing results. And now, those results were not typical. Bobby McGee is a rock star as you saw in the video. He’s an absolute celebrity run coach, but no one had ever heard of him.

Tactics, the main lesson you need to take across from what we learn in SilverCircle and SuperFastBusiness, is you have to execute quickly, and you have to iterate, and whoever does that better, and that’s what Lt. Col. Riley was so good at, was he got, he always acted quicker than an enemy.

They’d shoot at him with a sniper, he’d bring in the tanks, then he’d have the Bradleys come in, soldiers get out, snipers set in position, they go in and they kill them. And that’s what he was really good at. 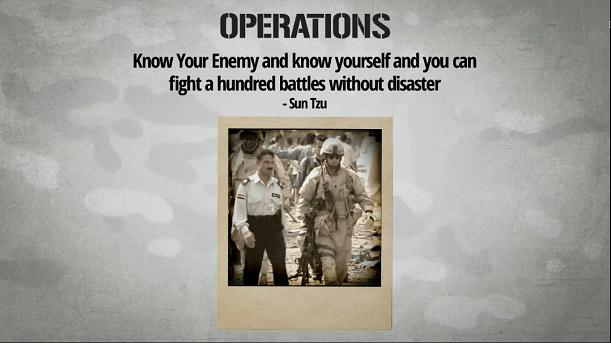 This man epitomizes operations, which is the next level of war after tactics.

And what we do in SilverCircle every week on our calls, is we go through and we evaluate. What did I do last week, did I do what I said I was going to do last week, what were the results, and what should I do this week? And that’s basically an intelligence assessment that you do and you pick your battles.

So you want to be patient and very methodical when you pick your battles, but you need to be relentless when you go into it. And Col. Hickey, what I saw him do in Iraq was an amazing display of that in the Battle of Tal Afar was he built relationships, built up his intelligence networks, and he knew exactly what needed to be done when we had to go into the city and have a very large fight, and that’s where Lt. Col. Riley was so good tactically.

So those two, both the same rank but had very different skills, that’s one tactical and one operational. What I figured out when I joined SilverCircle, and James, we’d done all the traffic stuff, was I needed to shift if I was going to take all those new leads and all that traffic, I needed to shift my emphasis. 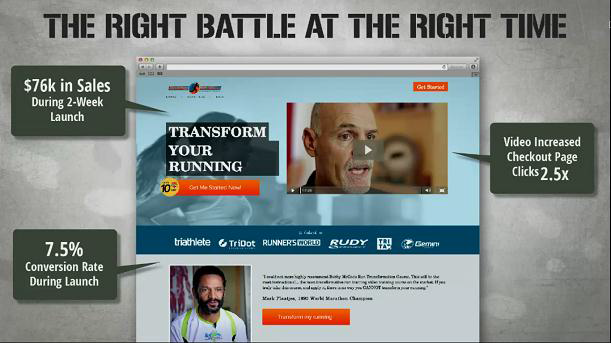 So James, I remember we sat down on a call and he said, “You need to get a converting offer and a converting funnel.” How do I do that? I came to SilverCircle, Ryan Spanger showed me how to make videos. I said to myself, “A sales page that converts is probably the most important thing for my offer right now.”

If you don’t have a sales page that converts, all the traffic in the world is never going to work. So we created this sales page and with that sales film, designed by a SilverCircle design team, video help produced by a SilverCircle video member, Ryan Spanger, he’s our video producer, and we did a launch of $76,000 within two weeks with a list of 4,000 people. And the video, what we found was 2.5 times people are more likely to go to the checkout page.

We also found that the video had an average of 17 minutes sales film, had an average of nine minutes watch per user. So, tremendous engagement, you just saw with two minutes what you can get when you have a really good video that builds rapport.

And in fact, I’m in a conversion course with Peep Laja right now, which James also recommended to me. And Peep says that bad videos can actually hurt sales. So the old days of put up a video and you impress people, you know, hold up your iPhone, poor production value is not going to help on the sales page anymore. So you really, if you’re going to do a video, you need to do it right. 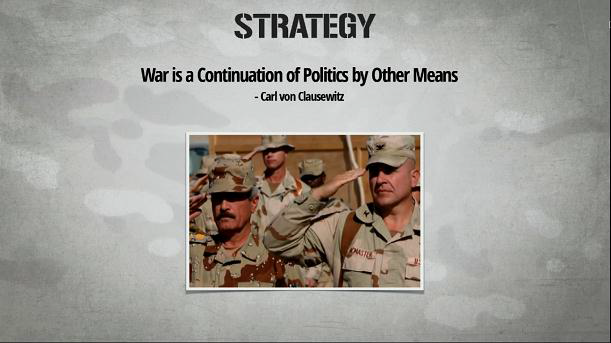 OK, strategy. The man saluting there is now a three-star general of the United States Army and my mentor. And he’s a lot like James. They’re both bald, gruff-looking and give it to you straight, right? And General McMaster – by the way, James told me, you know we’re in a bar in the Philippines and he says, “Sam, you know, you have no filter. You’re very blunt, you’re very direct. Do you realize that?”

I said “Yeah, you know, it’s the army, did that to me. That’s my excuse, but what’s yours?” And I still haven’t heard the answer from James, I’m going to talk to his mom, maybe she’ll let me figure it out.

Get more episodes – subscribe to the podcast in iTunes

Please leave your comments below

944 – Judgment Day for Your Offer with Trevor ToeCracker Crook