Can You Make 100K?
Click Here
New LoginOld LoginContact Support
Partnerships can be tricky. Can both parties sustain it, or will it just turn into a sinking ship? Listen to this episode and find out the answers.

– What is a partnership?
– Why does it often turn into a sinking ship?
– Partnership vs. Strategic alliance
– The catamaran approach
– Separate entities keep things safe

This is an extract from a 70-minute training. Get access to the full version here.

Next I want to talk about strategy and mindset. This one’s a favorite topic of mine and something that comes up a lot. It comes up in SuperFastBusiness, it comes up in SilverCircle. We’re basically saying how this impacts a lot of people’s business. And I want to talk about partnerships. And partnership is essentially where you’re putting yourself in with at least one other person, and sometimes even more, which is pretty crazy. Often they turn into a sinking ship.

Why partnership turns into a sinking ship
Now why does that happen? It happens because the chances of two people having the exact same preferences for a sustained period is unlikely. So they might start off good. The other this is, people often want a partner because they’re scared of doing things themselves. So the reality is, the other partner is not going to do it for you. They’re going to figure out that you’re the lazy one and they’re going to want to split the partnership. Or, you’re the one doing all the work and the other person’s the lazy one. And guess what, you’re going to want to break the partnership. So it kind of sucks.

And then the other thing is that even if you only have one other partner, often it’s a 50/50 partnership, so all the work you’re doing has to be halved. I see one popular software service is going quite well on the surface it seems, but then when you factor out the costs and then you divide the profit in half, it’s a pretty bad business.

So always be mindful that quite often, there’s more than one person involved and everything is not what it seems. You might see one picture but often (one of my mentors really taught me this), often a partnership turns into a sinking ship. It’s very rare that you get a sustained partnership that works well. 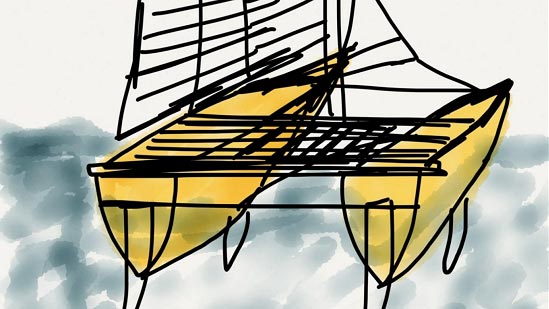 What to do?
So you might be thinking, what do you do? How do I structure things like my podcasts where I’ve got what looks like a partnership, but I would say that I have something slightly different, I’d say I’ve got more of a strategic alliance.

And you’ll tell from my wonderful illustration here, this is obviously a catamaran. You know, we’ve got two hulls and a deck in the middle, a trampoline, and then the sails. Now that’s the way that I approach my podcasts – as a strategic alliance or more of a joint venture.

Each of us has our own entity. One hull is mine, one hull is theirs. They’re both pointing in the same direction. They’re aligned. They go in the same direction. One hull can be in the water and the other hull can be in swinging in the air. It doesn’t always have to be both parties working at the same time. So that works well. And there’s that commonality in the middle. You know, you can cross between the two with the trampoline. But at the end of the day, if one hull sinks, the other one will still float. It’s not a mono-hull, it’s a multi-hull. You’ve got a little bit of safety.

It’s so much easier when you have separate entities and they either have a services agreement or a memorandum of understanding, or a letter of intent that just explains what the relationship is. But if it doesn’t work out, you just go your separate ways. You just get out the hacksaw, cut them in half and pair out with something else, or just go it alone.

OK. So this is my approach, I call it “the catamaran approach,” where you are working to the same direction but you each have your own independent business entity and you have just an arrangement that works well.

This training was an extract from the live monthly mastermind inside the members area. Be sure to join today so that you can attend the next one and get all the other modules. Click Here to Join