Can You Make 100K?
Click Here
New LoginOld LoginContact Support
Having the right people on your team, working in harmony with each other, is key to the success of your business. James and VirtualDOO’s Lloyd Thompson discuss best practice when it’s evident a staff hire isn’t working out. 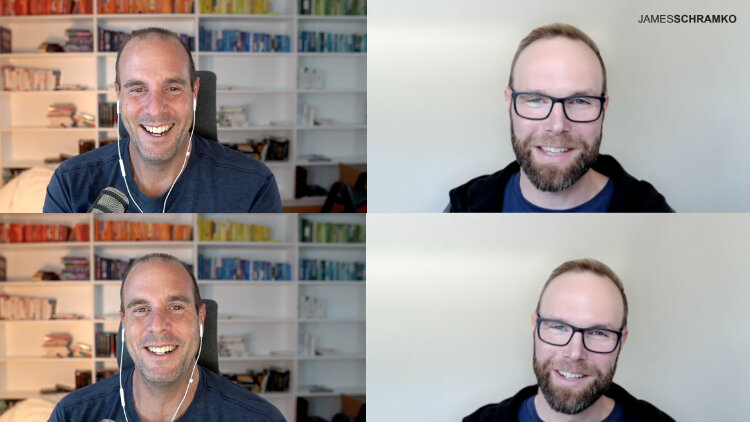 Lloyd Thompson of VirtualDOO specializes in people and systems – he helps business owners realize their vision by pairing them with operations managers who make things happen. And when a founder’s person in charge isn’t measuring up to expectations, he and his team are also ready to help.

In this episode, he shares the case study of one of his clients, who had to step back into managing things when her COO was found lacking in people skills.

Lloyd and James discuss how VirtualDOO helped this founder, and the importance of handling less-than-ideal staff in a timely manner.

And Lloyd gives tips for hiring the right person, with the right skills and character, for the role you need to fill.

Optimize your business with James’s help

1. When a founder has to step back in
2. Taking steps to fix things
3. Finding the right person with the right skills
4. The difficulty of letting someone go
5. What the right support can do for the founder
6. Lessons learned from getting the wrong person

a. Focus as much on character as on skill
b. Be aware of what you already have

7. The real takeaway from this ep

When a founder has to step back in

Lloyd’s client hired him and his team to replace her chief of operations, who she’d asked to leave. This had necessitated her stepping back into a management role, something hard to do while handling strategy and being the face of the business at the same time.

It had been a hard decision – on the one hand, the COO had gotten things done; stuff was moving. But she was a bit of a dictator, and that didn’t meld well with a team strong on empathy, relationships, and soft skills.

When team members began to resign, the founder saw no other option but to take back the reins of the operations. It was overwhelming, however, and to avoid making the same mistake twice she engaged VirtualDOO to help find a new chief.

Sometimes, says James, we can make a hasty decision on who can replace us just because we want to get out of it quickly. That might have been the case in this scenario.

The founder was referred to Lloyd and his team, which implied a level of proxy trust. The challenge now was finding a manager who was the right match for her business.

Hiring a director of operations, says Lloyd – in fact, let’s say this with any member of staff – it’s a little bit like dating. One DOO might work great with one founder, but could do terribly with another.

In this case, the culture of the founder’s business was very relationship-focused. So while skills were definitely crucial, they also needed to focus on character, and find someone with strong empathy, a real people person.

Lloyd and team took time with the process of finding a match. They knew the wrong decision could incur cost in more management down the track, as well as unhappiness and other consequences.

Skills are just one aspect of hiring, says Lloyd. Right people, right seats – right seats is about the skills, and often people focus overly much on this.

Has this person got the right abilities? Do they get and want the role and have the capacity to do it?

On the other side, it’s right person – do they fit the core values of the business?

In this case, Lloyd believes they’ve made a win – someone capable who matches the company values around people and relationships. The founder has a DOO and a sellable business that can run without her.

The difficulty of letting someone go

People often feel terrible about letting a team member go. And James advises them, providing you’ve hired appropriately, and providing you’ve offered training and ongoing reviews and counsel and support, if someone doesn’t perform in a role, or they have bad habits they’re bringing to the role, they are responsible for that behavior, and they need to own that.

So when you’re forced to consider how to fire someone, it’s because they placed themselves in that situation via their behavior. And to continue to support that, to soak it up and not call it out, is denying that person an opportunity for true growth – you’re not being open with them about their behavior, and you’re not giving them the opportunity to course-correct.

And the longer you compensate for someone like that and enable them, the harder it will be for them down the track. That’s why James doesn’t feel too bad when it comes to it, because he didn’t put them in that position. He’s done his side of the bargain.

What the right support can do for the founder

James is curious: how did the founder deal with having intervention and support and assistance in taking the risk of hiring again – did it pay off for them?

Absolutely, says Lloyd. And it surprises him how much of what they do is actually support for the founder, who can be feeling quite alone in what they do.

Entrepreneurship is a lonely sport, says James. A large part of what he does is reassuring clients and partners, telling them what they really should and shouldn’t be worrying about.

Sometimes, says Lloyd, their job is also holding the client accountable – You’ve seen the impact of this. That person needs to go.

Fortunately, in this case, they entered when the person had already left, and just needed to make sure they weren’t bringing in someone similar.

Lessons learned from getting the wrong person

What were the lessons learned from working with this client, asks James?

Focus as much on character as on skill

As mentioned before, says Lloyd, one was the mistake of focusing too much on skill. The founder had hired a great delegator and task manager who got things done; where they fell short was the character match.

There are things you can do to assess character, Lloyd says, the most simple one being, ask the candidate to describe themselves in three words. Not that you would base your whole assessment on that, but it’s amazing how much it will give you.

Be aware of what you already have

Second lesson is, it’s not just about hiring people.

If you hire well, that’s great, you’ve set yourself up. That’s one of the key attributes to success.

But also, you’ve got to be careful with what you already have. If you’re hanging on to someone who’s toxic in your culture, that will just spread – it will harm a harmonious work environment, which will cost you.

James recalls when he became sales manager in Mercedes-Benz. He did so well, he was assigned to fix up the sales team at another dealership.

The dealership’s team of seven sold 27 cars in a month, when their target was 100. After four years under James’s watch, they beat the biggest dealership in AU for monthly sales volume.

James basically had to start from scratch, however, replacing nearly everyone on the sales team.

The real takeaway from this ep

What James really wants to emphasize from this episode is, before building your dream team, examine your current team for anyone who may sabotage the culture and the business from the inside. Maybe some culling is in order.

James would say that everything they’ve talked about is the responsibility of the founder/CEO or whoever’s in charge of recruitment. You have to take responsibility if you’ve got bad team members in your team, and you’ve got to sort it out quickly.

Lloyd agrees. Fortunately for their founder client, she acted before any more damage was done.

If you’re struggling with your people or your systems, Lloyd can help. Get in touch with him at [email protected]

Thrive with other business owners inside the James Schramko membership

Liked the show? Leave us a review on iTunes

973 – The Absolute Best Way to Use No-Code Apps