John Lee Dumas of Entrepreneur On Fire is one of the best-known names in internet marketing. He appeared on SFB in 2013, and we're very glad to have him back on the show.

This episode, John brings with him a brand new book, endorsed by some of the industry's power players. He also opens up with counterintuitive insights into the nature of success.

Got time to spare? Settle in for an entertaining and thought-provoking interview with JLD. 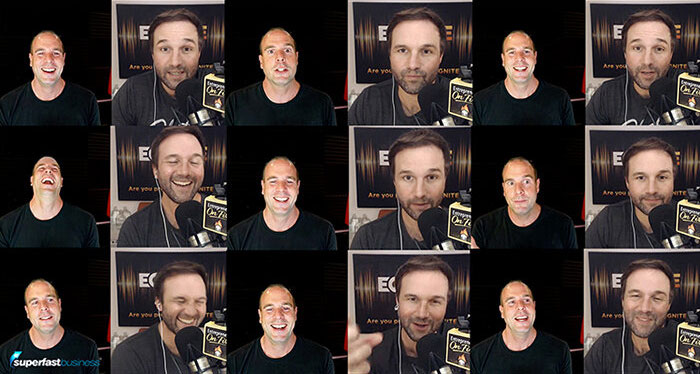 Achieve real and sustainable business success with help from James

It’s been eight years since John Lee Dumas’s last appearance on the show, and we’re very happy to have him back. There’s much to talk about, with his ongoing Entrepreneur on Fire podcast, his paid membership, and most especially his new book.

What should I podcast about?

As a veteran podcaster, what kind of show format does John suggest people adopt? Every second person, it seems, wants to do an interview format, as some of the big names in podcasting, John included, have done.

To those people, John says, “What I recommend instead is, why don’t you identify one single problem, just one single problem that you can provide the best solution to literally in the world, and then go and podcast on that one specific thing? And people, if you do it right, will beat a path to your doorstep for that best, number one solution to a real pain point, struggle, obstacle, challenge that they have.”

“Recurring income is overrated.” It was a famous tweet of John Lee Dumas. His paid community, Podcasters’ Paradise, was bringing in lots of money with its one-time fee for lifetime access. James suggested going recurring, but for the longest time John resisted, and it became a point of good-natured disagreement between them.

John did eventually go recurring, seeing it was the right business move. Given the chance to do things over, though, he says he still would have done one-time first. Recurring is a hard thing to sell, at least at the start.

The book and the heavy hitters who endorsed it

What James really wants to talk about is John’s newest book, The Common Path to Uncommon Success. It’s taglined “A Roadmap to Financial Freedom and Fulfillment”.

A great point of interest, first of all, is the personalities who have given the book their endorsement. Gary Vaynerchuk, the OG of online content, has personally read and endorsed it. So has 19-time bestselling author Seth Godin, who also favored John with a 45-minute, private consultation Zoom call as a result of reading the book.

Achieving quality through quantity on EOFire

Speaking of Seth Godin, James reflects on the sheer amount of content Seth has put out. And some of it, says James, was a bit ordinary, while some was great. The best way to get amazing stuff, he concludes, is to just produce a lot of it, and some has got to be good.

John concurs. Just get stuff out there. If you are going to put in the reps, that’s how you’re going to make it in this world – the very reason, he says, why he did a daily podcast. He just wasn’t going to improve doing four episodes a month. He scrapped some episodes and he lost recordings, but he kept moving forward and getting better.

Quantity became John’s differentiator as well. It was the barrier around his business which was so high, no one could compete. There was no one else in podcasting interviewing the best entrepreneurs on a daily basis.

Uncommon success, and why it’s desirable

In the many years of the EOF program, John Lee Dumas has interviewed over 3000 successful entrepreneurs. And he’s learned an amazing truth. Certain people would like you to believe that the path to success is hidden, and secret, and complicated – the fact is, the path to uncommon success is not hidden, it is a common path.

“The path to uncommon success is not hidden, it is a common path.”

Take James, he says, who is likely never going to be a billionaire. He has achieved uncommon success. He has the freedom to surf every day, to spend time at the park with his daughter, to spend only as much time as he wants on his business and to do things he enjoys. He is done with putting on a suit and tie and selling luxury cars to people who sometimes can’t afford them. And he now gives other people skills that they can use to achieve their version of uncommon success.

The premise of the book is that there is such a thing as enough – something many people, especially entrepreneurs, don’t realize. It invites readers to identify their uncommon success, and it provides a 17-step roadmap to reach it. These steps are principles that he, James, and every person he’s interviewed has followed.

“There’s such a thing as enough.”

It’s good to know when something’s not for you

John asserts a somewhat controversial point from the book, though. If you read it, and if you follow its principles, and after three to six months have not begun the road towards achieving your uncommon success, give up. Entrepreneurship, or online marketing, whatever you want to call it, is not for you.

And that’s okay. The book will take you to that realization fast, and you can go chase something that is for you. People can do okay without becoming entrepreneurs. And if you find out sooner than later that it’s not for you, that’s a good thing.

How John lives out his uncommon success

John himself has no desire to be a billionaire. He has not been growing his business, he says, just continuing to do what works, according to the lifestyle he wants.

He has three virtual assistants, whose salaries total under $4,000 monthly. His net profit to gross margin rate is typically over 80 percent every single month. And he lives in Puerto Rico, where tax is four percent.

Five days per month, John is grinding at work. The rest of the time he’ll work a couple of hours on email and such.

Pre-COVID, JLD would typically spend 75 to 90 days out of the year unplugged, traveling the world. He’s not a billionaire, but he lives the life of his choice.

The reason that the rich get richer

John gives special mention to chapter 17, the final step in the book – keeping the money you make. Because, he says, if you can learn to, number one, make money; number two, live below your means; and number three, keep the money you make, you start to understand at a real level why the rich get richer.

“Keep the money you make, so you can start making that money work for you.”

When you keep the money you make, you can put it to work for you. And when you do that, it can compound. And the eighth wonder of the world is compounding interest.

John made more money last month from his investments in silver and gold than from his business. Three times as much. Because he has the money that will allow him to easily invest a million dollars. When it spikes, it spikes; when it crashes, it crashes. But he can afford to take risks like that.

If you’re interested in John Lee Dumas’s book, visit uncommonsuccessbook.com. You’ll see the endorsements and a video telling more about the book. Chapter One is there for free, as well.

Enjoyed the show? Leave us a review on iTunes

980 – This One Tool has Transformed My Membership

979 – Double Your Conversions in 8 Months with Hyperfocused SEO

977 – Behind the Scenes: Migrating an Established Membership Community (Mine)