Layne Beachley is a champion in more ways than one. She’s won the surfing world championship seven times, and beyond that, she knows how to win at life.

Listen in as we trace Layne’s journey, from her early surfing roots to the challenges of competition. Hear, too, how she strengthened her mindset and now teaches other people how to think like a winner.

You can learn how to win from winners. And in this episode of SuperFastBusiness, we’ve got a real champion as guest – a seven-time surfing world champion, that is.

Layne Beachley is one of the most famous female surfers. She came to the sport early, starting when she was four. She looks back fondly now on her childhood, but the road to becoming a champion was not an easy one.

Going to an all girls’ high school, Layne found things rather toxic. Why did girls have to be so hard on each other, so emotionally vindictive, she wondered. She much preferred the company of guys, and when she started competing as a teenager, it was against male surfers.

In the amateur rounds, Layne started going up against girls. She found that they wouldn’t celebrate the success of others, but would bring down anyone who beat them. Disliking that environment, Layne backed out of the amateurs.

Breaking into professional surfing was no piece of cake. Layne endured fatigue, poor health, and difficult travel. Women’s surfing was not as well-sponsored as men’s, and she had to live on a limited budget.

Journaling was a tool for her then, both to weather the difficult times and to celebrate the good, and it still is. It was in hindsight and by looking back through those journals that she realized how much harder some things were for her than they needed to be.

Layne had a habit of outward stoicism when dealing with pain. She would push through injuries, revealing little of what she felt to other people, and won some victories under physically grueling circumstances.

Some early tough love made Layne associate injury with shame. It was in her adult years that she became conscious of that, and learned to recognize and overcome her tendency to suffer in silence. 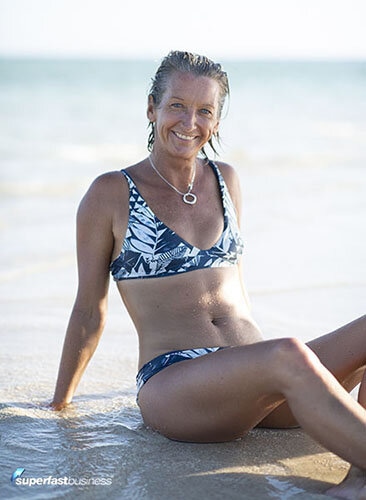 Who you should be competing with

In her early years, winning was very important to Layne, something she equated with love. That faded when she chose to retire from the pros’ tour.

Now she competes constantly with the best version of herself. What she’s realized, doing that, is that the best versions of us change. Our values, expectations, desires and vision all evolve as we do.

The person Layne was, competing in the 80’s and 90’s, was not who she is today. Then, she had fierce expectations of herself, but her results ebbed and flowed with her self-worth. Today, she is still driven, but in a different and much more sustainable way.

How to win when facing down the big waves

Layne has surfed some of the biggest waves ridden by a female surfer, and done it with amazing composure. This she credits to lots of preparation.

“Fall in love with the process and detach yourself from the outcome.”

When you’re aiming for any big result, the enemy is to expect instant gratification. It usually takes a long time to reach the goal, so fall in love with the process and detach yourself from the outcome, says Layne.

Layne practiced towing into waves and using the equipment involved, honing her skills. And at the same time, there was mental preparation – getting ready for anything that could go wrong, and accepting the worst case scenario, in her case, possibly dying.

“Succeeding is as simple as stop focusing on what you don’t want.”

Then, too, do not compare yourself to others. Learn from people who have done what you want to do, but don’t measure yourself against them. The minute you start comparing yourself, you’re never going to feel good enough.

Why you should always elevate the competition

It’s very tempting to have an unhealthy attitude about your competitors. Layne was given some good advice in the 90s, after putting down a competitor on TV. World champion Barton Lynch told her she was setting herself up to fail. She was turning the whole world either against her or for her. If she lost to her competitor, she’d look like an idiot. The best thing she could do was start building up that other surfer, because if Layne won, it would make her look so much better.

With that mindset shift, said Layne, she stopped comparing and fearing. She was able to focus not on the competition, but on herself – what did she need to do right?

Taking control of your media presence

In an age where anyone can be in charge of their own media and profile, Layne has her viewpoint to share. She has always been very media savvy, recognizing her position as a role model and champion. She has not allowed the media to dictate terms to her.

She goes in asking:

“Media literally is a manipulative force.”

What does Layne do when she’s not surfing? She has a program called Awake Academy. The objective behind Awake is to help people become their own accountability partner. She has a course there called Own Your Truth, the inspiration of which is to help people wake up, own their ship, and trust in love. Too many people function from a fear-based mentality, which she used to as well.

Of her seven world titles, says Layne, five were won in a state of fear. You don’t have to succeed in fear, she says. Had she known how to succeed in love instead, she would have had a much easier time. Her fierce determination, her many expectations, her focusing solely on the outcome made things more difficult than they needed to be.

If you want a healthy, positive way to think like a winner, Layne’s seven-round course can be found at awakeacademy.com.au. It’s a self-paced, self-empowerment platform of 19 videos and 29 modules, with a hundred-page workbook.

Layne has a great framework applicable to any aspect of life. It’s called the The Sustained Success Framework, made up of three steps:

Aligned with this, she sets her calendar by the surf forecast. And she takes Mondays off, to avoid using Sundays to prepare for the week ahead.

2. Your dream team – Who is it within your framework or your network that can help you achieve what your vision is? And then you’ve got to have the strength of clarity of vision and communication and confidence to share that vision with your dream team so they can best help you.

Be clear, have your team, and then take action. That, says Layne, seems to be a model that has helped her become a multiple-time world champion, build a great business, go from being the beach babe to chair of the board at Surfing Australia, and everything in between.

Join our thriving community of entrepreneurs inside JamesSchramko membership

Liked the show? Leave us a review on iTunes